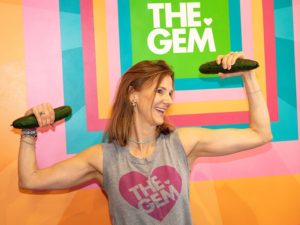 So. This happened. It’s the stuff Organic Juice Bar Horror movies are made of. We were given some of the worst news there is if you are an organic juice bar like The GEM. Wait for it: THERE ARE NO ORGANIC CUCUMBERS AVAILABLE FOR A WEEK. O.M.G.G! (Oh, my, Green Glow) We broke into a cold sweat. What’s an Honestly Organic Girl to do?

We were encouraged to pull the “organic when available” schtick and use conventional cucumbers for the next few days, or even worse, pretend like nothing happened and no one would be the wiser. An inside source told us that we were the only folks in town who order only organic. YIKES. Tempting as it might be, UMMMM. No. If MK and I won’t drink it, we won’t sell it.

Wonder Twin Powers Activate. We sprang into action. We went on a scavenger hunt to several Whole Foods, and they really came out the hero! The search was a success, and we scrounged up about 350 pounds of organic cucumbers from around town. Our incredible produce supplier also helped!

We did the right thing. Don’t you want to know you are getting what you think you are getting? We are proud to say, at The GEM, you do. For us, it’s Honestly Organic. NOT when possible or feasible. ALWAYS.

5 thoughts on “Far And Wide, We Go The Distance To Stay Honestly Organic”