Inspire someone. Influence. Motivate. Can you do it?

The Komen 3 Day/60 mile Walk this past weekend brought out many inspiring people. Many were walking because they really wanted to show support for a loved one who was battling this disease. Some walked to honor those who had lost their lives to kancer. Some were ‘Survivors.’ They all felt inspired to make a statement of 60 miles and raised over $7million to prove it. Some of these people had NO business walking 60 miles. Too heavy, too old, too weak. And yet they did it.

One woman in particular stood with me in the Survivor’s Circle in the opening and closing ceremony. Rinni obviously represented some aspect of inspiration to be on stage. She carried the flag of COURAGE. This forty-something woman looked like she was finishing up a chemo regimen. That’s a scary battle that takes courage–one that every woman on that stage had experienced. As we rehearsed the day before the Walk, I learned this was far more that just a round of chemo. This marked the end of her THIRD recurrence. While training for this walk, Rinni’s kancer returned with a vengeance to her brain and liver. Her doctors insisted she drop out. Her teammates, her fabulous friends, however, refused to let her fade into the woodwork. They insisted she take this small yet powerful journey with them. They pimped out a wheel chair in hot pink sparkles and wings and PUSHED HER FOR SIXTY MILES. She had the COURAGE to stay in the game and face this kancer with her head up to be the true inspiration for all of us. She has children. She could have easily stayed home and focused on herself and her family for the rest of her limited days. I must say most of us would shrink into the darkness of fear of stage four kancer. She wasn’t about to. She chose to be out in front, to show others how to live in the face of something so scary. AMAZING. Her flag, no doubt, was the definition of INSPIRATION.

See pathetic photo of me below. Mile 58 of the 3 Day Komen Walk. Not a pretty sight. And definitely not inspiring. Who would take notice if I dropped out? I could easily hitch a ride home and call it a crazy weekend. It wasn’t a race, there were no prizes, I had nothing to gain, really. Nor did the thousands of women out there with me. Thank God I had teammates who motivated me to keep going, that I had a flag to carry,that Rinni was now a part of my psyche, that it mattered.

Sometimes you want to quit. Sometimes you think no one will care anyway. It’s too hard. It’s too much to handle. Well, I call bullshit. Get up, get moving and make a difference. Believe it or not, you will inspire someone else to do the same. You may never even know it. It may seem others have it easier. More than likely, they don’t. They are pushing through their challenges, never giving up. So do something, do anything, that matters. 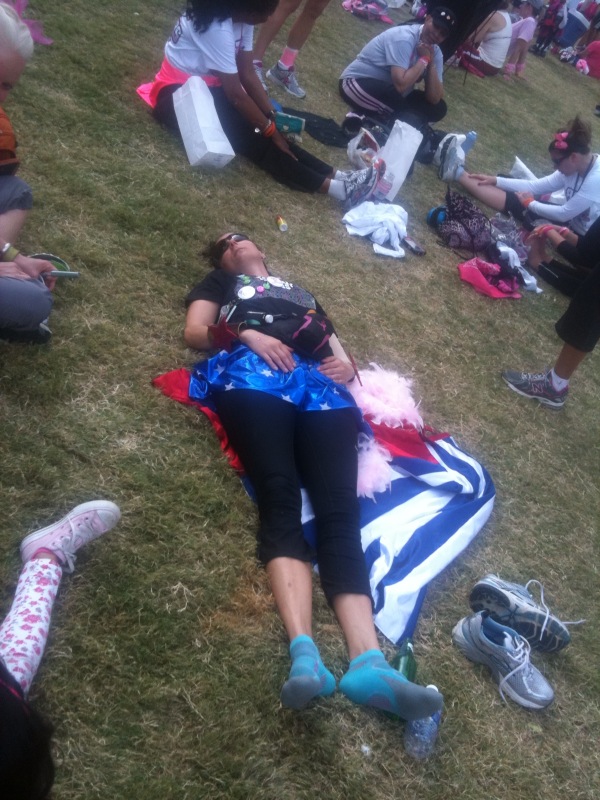 8 thoughts on “Make It Count”